It took 3 fewer weeks than I planned and about 13K fewer words but it doesn’t matter because I reached the end of my WIP! The rough draft, that is. 😉 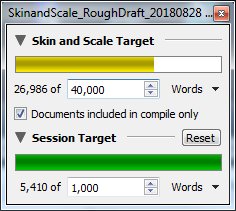 Remember, this is really rough. There are so many placeholders. There’s an entire sequence that will most likely consist of multiple scenes that is currently only represented by a single sentence. And it’s not the only one. This happens when I am well past this section of the manuscript and think, “Oh! I should add that!” And instead of stopping my forward momentum and going back to write those scenes, I only make the note then move on. I NEVER backtrack more than a paragraph when I’m writing a rough draft because I’ll only ever work on what’s already written and never finish the draft. And I only go back a paragraph if it’s been a few days since I last worked on a WIP, just to catch myself up with where I was.

Anyway, that doesn’t matter anymore because this draft is done! WOO!

I know I had this whole plan for finishing the series before I went back to revise the first book… Wellllllll…. By now, don’t you know I make plans and never stick to them? LOL

Here’s the thing. For the first time, I have a solid “outline” for the next book. The characters are WAY more solid than before. The world building is flipping concrete! And, I think with the new developments in book 2 it would be a good idea to clean up book 1 to make it consistent with book 2, then revise book 2 so it flows from book 1, then write book 3, rinse and repeat.

Again, I’m making a plan I probably won’t stick to but at least I have a plan and am writing!

Look what came today 😍😍Isn’t he pretty 🥰 Time to proofread 😅
LOVE ON BLAKE AND MAIN
NEXT WEEK!!! The cover reveal for Heating Up the Holidays: A Year of Steamy Celebrations on April 27th. We're so excited to show you! This anthology is going to be 🔥🔥🔥!!
“You still want that drink?” Luke asks.
Sharing is caring 🥰🥰
This week on #huthanthologythursday we're bringing you a look inside All Gobbled Up by @mindymckinleyromance - A friends to lovers thanksgiving story🦃
<span>%d</span> bloggers like this:
<span>%d</span> bloggers like this: