What’s your biggest inspiration that led you to writing?

So, Kenneth Howard, a dear friend, asked this question on my Ask Me Anything page and I answered.

The things is, it’s more complicated. It’s 100% true, but there are more layers.

Here’s my original answer to Kenneth’s question:
Biggest, is definitely my husband. When I came to him and told him I wanted to try writing again, but I was scared of the time and energy it would take. Scared of losing myself in yet another time consuming endeavor, he cheered me on. He reminded me that we’re in this together and whenever I get discouraged, he’s there to pick me up and keep me going. I wouldn’t and couldn’t do this without him ❤

Again? You mean you wrote before and stopped? What happened?

When I was kid, I wrote all the time. Mostly on yellow legal pads and mostly about balloons for some reason. Once, pretty sure I was in grade school, but it might have been in junior high, I wrote a murder mystery about a live radio show, where the actors were being killed off during the broadcast. Now, to be honest, I’m pretty sure I just ripped off Radioland Murders (1994). But if you were to ask my memory and not my common sense, my memory would tell you, I wrote my story before the movie came out and they ripped me off, because I swear I remember being inspired by Phantom of the Opera and my story wasn’t a comedy. But I’ll never know, because I have a terrible memory, and that notebook is long gone. Not that there would have been a date on it. Still wish I had it.

Anyway… Why did I stop writing? The short answer, school. I’ve always been a slow reader and when I was in grade school, it mattered. I can’t remember the program, but it used breeds of birds to split the class up into groups by how well you could read. I never could get out of the bottom group, because no matter how much I tried, I couldn’t read fast AND retain what I read. Because of this, my 8 year old brain thought I wasn’t good enough and I gave up on reading and not long after, writing.

Of course, I read and wrote when I had to, for school, but it never helped. I was constantly met with a chorus of “not good enough.” One high school teacher, who I respected and confided in, that I wanted to write stories, told me my grammar and spelling wasn’t good enough and I needed to fix it if I ever wanted to make it as a writer. Whether she liked my stories or not, regardless of my technical issues, I don’t know. She only ever focused on the negative.

The desire never left me, but the voices of all the naysayers never left me either. And I thought that would always be the way. Until a pretty big, near life-ending event, showed me I can’t let what other people think about me keep me from doing what I love. And I can’t do it alone.

This is why I stopped writing, and reading, and this is why I have my incredible husband to thank for inspiring me to write. He supports me.

That’s deep. You got a lighter answer?

Sort of… As cliche as it seems, my desire to write was revitalized with a dream. But not so cliche, was that it wasn’t my dream, it was my husband’s.

One morning, in November of 2015, he woke up and told me about a crazy dream he had. I won’t go into detail just because I might still use it someday. When he finished, I told him I thought it would make a great book and he said, “write it!” Well, this wasn’t the first time we’d had this exchange. Over our, then, twelve years of marriage, I’d thought of and told him an idea would make a great book/movie, he’d say “write it!” and that was it. Or I’d develop the idea, tell him all about it and that’s where it died.

This time, in 2015, was no different. Except, I got mad about it dying. It was a cool idea and it was going to just sit in a notebook and no one was going to see it. For the first time, instead of accepting that this was how it was always going to be, I took action.

Research, self-reflection, more research. Round and round I went, until I figured it out. For me, once I tell a story, it’s told and I have no desire to tell it again.

This is where my wonderful husband comes back in. We had just been through a lot in the way of learning how to better communicate. Imagine my dismay when I realized the only way for me to write, successfully, was to not communicate my thoughts and ideas with him. 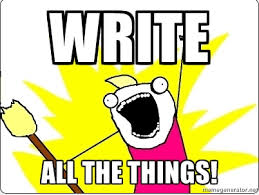 But I had nothing to worry about, because when I told him how much writing meant to me, he understood and I moved forward with my writing. And I wrote and wrote and wrote. And I will continue to write until I run out of ideas. All thanks to the support of my #1 fan. My Tebbiebear ♥